Failed to install the following Android SDK packages as some licences have not been accepted.

Failed to install the following Android SDK packages as some licences have not been accepted.
build-tools;28.0.3 Android SDK Build-Tools 28.0.3 platforms;android-28 Android SDK Platform 28 If you stumbled upon the same error, then you could try these:

If you compile ReactNative Android OneSignal plugin and hit the unhandled

What to do if you see the Error Message:
This error means it couldn’t find the Python modules – please make sure you are running the correct version of Python (probably Python 3.7, that depends on the Panda3D version) and that the panda3d.pth is located inside the Python site- packages directory.

Email ThisBlogThis!Share to TwitterShare to FacebookShare to Pinterest
Labels: Panda3D

Just feel so bored with the same problem over and over again, it is my internal Wifi.
It keeps disconnecting frequently. I bought a USB Wifi dongle and it also does not
help very much.

After some googling and found out that there is wifi.powersafe option that could be
set to disabled wifi power safe, link. Immediately set the conf file

add this in the file if blank:


And if there is entries, then try to look for the above option and set to 2.
Which you could check for each of the options are

Then restart the NetworkManager


Or something looks similar that saying xxx.v4.app.ActivityCompat?
Well here is the SO, the solution is to jetify.


Use this :
step 1: add these two lines in gradlew.properties Visit for complete guideline

step 2: use these commands
First of all remove node_modules folder and reinstall it using
or
and then
Call
Happy coding ^^
at September 30, 2019 No comments: 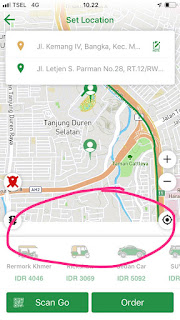 Then the map got truncated or not full screen.

Yup i came across, when XCode build Archive the error were ld: 362 duplicate symbols for architecture arm64. The solution is the provided link.

Open Podfile and check the bottom part:
supposed to show something like

I solved this issue by the following: (ref.: https://github.com/react-community/react-native-maps/issues/718)
Pods-{TARGET-NAME}.release.xcconfig e Pods-{TARGET-NAME}.debug.xcconfig
It works now.
Side effects from the link above: the app may become larger as there may be duplicated symbols in it.
Hope it can help you.


If you see none, that add that one and then execute $ pod install
so the Pods project would be rebuild.

Email ThisBlogThis!Share to TwitterShare to FacebookShare to Pinterest
Labels: xcode

ReactNative Error no such file or directory: '.../node_modules/react-native-maps/lib/ios/AirGoogleMaps/DummyView.m'

If you eve encounter the same situation

clang: error: no such file or directory: '/Users/adesantoasman/.../node_modules/react-native-maps/lib/ios/AirGoogleMaps/DummyView.m'

Then simply do these:
1. go to the node_modules/react-native-maps/lib/ios/AirGoogleMaps/

Refer to this https://github.com/ionic-team/ionic/issues/15324 and make sure to
modify the package.json

I resolved this issue and succesfully implemented GMaps on IOS simulator by the followings:
(ref.: http://stackoverflow.com/questions/24298144/duplicate-symbols-for-architecture-x86-64)
Side effects from the link above: the app may become larger as there may be duplicated symbols during compile
Hope can help you.
P.S. Not yet try on real device

You could edit a file of platforms/android/cordova-plugin-fcm/xxx-FCMPlugin.gradle
At the end of the file shows

ionic2 projects are very sensitive with its node_modules and dependencies, to me personally.
And bad luck came to me when i rename my project name. And the iOS platform has to be
recreate.

Starting all my problems. After successfully running
$ cordova platform rm ios
$ corvoda build ios
Everything went smooth event i can archive and upload to TestFligtth

I don't really sure if that is the root of all evil, anyway the Android was smooth.
And i need to be sured that smooth to ios too. And there is something to be edited,
an error of _requiresUserActionForMediaPlayback at AppBackground.m
just remove the underscore ( _ ) char from the beginning or requiresUser..

And if you stumbled with linking problem, as it shows many duplicate vars
at the xcode build report, then simply go to build phase and type the keyword
e.g SOSPicker then it will shows 2 or more SOSPicker.m and remove the ones
that not use then rebuild.

is the solution. It will shows which gradle being used.

As per my case `$ which gradle ` shows to /usr/local/bin/gradle but
the cordova execution refers to Android Studio' gradle.

adesst
saya ini ulet :D I am a worm :D

Visit Dynamic Drive for free, original DHTML scripts and components, all of which utilize the latest in DHTML and JavaScript technology!

Failed to install the following Android SDK packages as some licences have not been accepted.