- January 19, 2016
Having some bunches of E/OMXCodec error? That saying unable to playback your audio files?
Well i had been struggle with the same error. My situation is to play an MP3 file with
Android MediaPlayer API. The API works fine in my android 4.0 and 4.2 that plays
the alarm sound.

But it fails in my newer phones, which runs android 4.4.2. So i googled and found out that the MP3
also could be played with Ringtone and RingtoneManager.

Popular posts from this blog 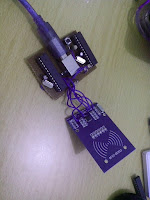 Wrapped my project into nice grey project box. Nice project i have to combine Arduino, RFID (RC522), VUsb together as HID Keyboard. Just tap an RFID card and my little chips send it to computer as keyboard input. Warning this project not working on Windows XP. And runs perfect on Linux OS, WinVista, Win7 and Win8.1 **Updates https://github.com/adesst/arduino-vusb You will need to create a dir named *UsbDevice* in the arduino libraries, this example taken from my Linux Debian8 64, yours may vary. adesanto@debian8:/opt/AVR/arduino-1.6.9/libraries$ ls -ltha total 6.1M drwxr-xr-x 26 adesanto adesanto 4.0K Feb 12 00:49 . drwxr-xr-x 12 adesanto adesanto 4.0K Feb 12 00:49 .. drwxr-xr-x  3 adesanto adesanto 4.0K Feb 12 00:12 UsbDevice And clone the code into the newly created dir. Then the 2 codes below are good to be compiled. For the source codes, you can find them here: https://github.com/adesst/arduino-vusb-hid-rfid-keyboard Flash this code to 1st chip, that wi
Read more

- January 05, 2011
I had made some changes so the component could work with cakePhp 1.3, or at least it works in my application. The original article is here , download the latest and the code i have modified. Make sure you have: 1. Copied the component file into your app/controllers/components. 2. Copied the view file into your app/views/element/ 3. To use "captcha_code" field form input. You could "diff" to see what changes i had made in the code, specially the component file. Hope it helps. Happy baking.
Read more